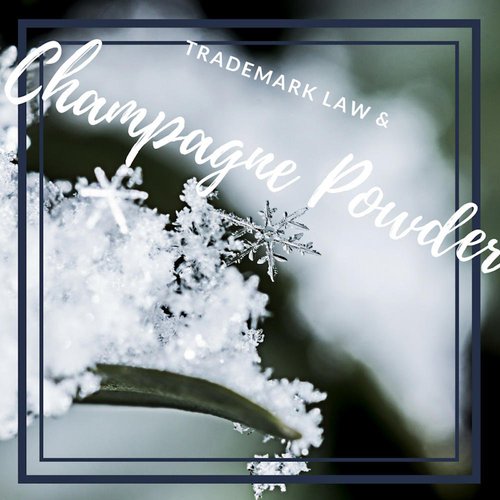 If you love to ski or snowboard, you may have heard of “champagne powder”, the dry, light and fluffy snow we love best.  But, from a meteorological standpoint, what is it?

Well, champagne powder does not actually describe a particular kind of snow crystal or water-density level, nor is it a term much used by meteorologists or snow scientists.

Instead, “champagne powder” owes its fame to ski industry marketing, with one resort in particular, Steamboat Ski and Resort Corporation (Steamboat), leading the charge.

According to Steamboat legend, back in the 1950s, a rancher named Joe McElroy was skiing with friends near the town of Steamboat Springs, Colorado (before the resort was created) and got sprayed in the face with snow.  He told his friends it tickled his nose like champagne – “champagne powder!” The phrase began to spread across the Yampa Valley, and starting in the 1960s, Steamboat the new ski resort started using it in its marketing. 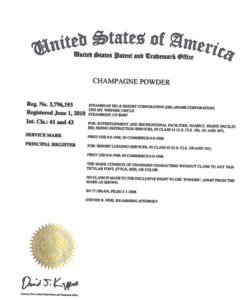 With its C&D letters, Steamboat pursued an aggressive trademark protection strategy aimed at preventing anyone else, including journalists, bloggers and weather professionals, from using “champagne powder” to describe snow or ski conditions at all. 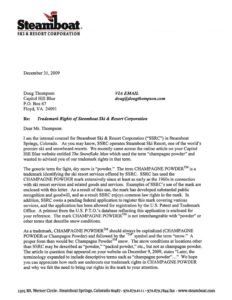 Then in 2014, Steamboat successfully prevented a gaming software company from using “Champagne Powder” for a casino video game.

It is fair to say Steamboat’s early round of C&D letters infuriated the ski community.  Recipients from California to Utah to Montana shared their letters, as well as the name and contact information for Steamboat’s attorney, all over the Internet.  Online forums and message boards pointed out that “champagne powder” had been widely used in the global ski community for decades, not to describe a particular ski resort or mountain, but a certain kind of snow conditions.  In fact, at that time Champagne Powder even had its own Wikipedia page.  This page made no mention of Steamboat.  The introduction only stated:

“Champagne powder is a very smooth and dry snow, which is great for skiing. The term originates from the ski resorts in the Rocky Mountains, which often have these snow conditions. The name derives from the sparkling wine champagne . . . .”

then went on to describe the weather conditions that created the snow.

Meanwhile, at least one business, Unofficial Networks, a “ski bum’s guide to outdoor news and entertainment”, thumbed their noses after receiving their Steamboat C&D letter and revised a certain offending headline to “Sparkling Wine Powder.”

Steamboat’s response to the flurry of bad PR around the country was to explain that, under trademark law, they were required to issue a C&D letter whenever they saw a use of “champagne powder” that infringed its trademark rights.

Steamboat was correct.  Trademark law says that if a trademark owner doesn’t adequately monitor its mark and allows others to use (and infringe on) it, the trademark rights can be invalidated.  Enforcement is a required part of trademark ownership.  If you don’t enforce, you potentially give up your rights.

However, it is important to realize that a federal trademark registration does not give you absolute rights to prevent anyone else from using the word or phrase in any context whatsoever.  Trademark law is designed to protect consumers from confusion about the source of products and services.  It is not designed to give trademark owners an exclusive property right to those words, phrases or designs.  That is, it doesn’t let you claim that any use of your trademark by a third party violates the law.

Thus, arguably, Steamboat’s enforcement efforts are appropriate only if it prevents uses of “champagne powder” that are confusing consumers, with the big assumption being that most of us know “champagne powder” as something related to the Steamboat brand.

Is Steamboat’s champagne powder enforcement strategy actually in line with trademark law? The appropriateness of the legal claims Steamboat makes in its C&D letters and its other aggressive trademark protection efforts cannot be determined unless Steamboat finds itself in court.  Then, a judge or jury will be tasked to decide whether its positions are valid under current trademark and unfair competition law.  So far, no one has formally challenged Steamboat to determine how strong its “champagne powder” trademark actually is.

If you have received a C&D letter from Steamboat or anyone else, or have questions about registering your trademark or protecting your brand, contact our Intellectual Property team today!

There are times in our lives when we have a dispute with someone about something. The dispute could involve our ...
Learn More

The Volunteer Attorney Impact Award is given by the Colorado Business Committee for the Arts (CBCA) to one attorney each ...
Learn More

If you need to contact anyone about a case or matter that was being handled by the Law Offices of Daniel T. Goodwin, please contact us below